There is a high probability that you’re still using the Old Model of Selling. This is the model in which you have a pitch or presentation that details all the logical features and benefits of what you’re selling. You call or approach a prospect and tell them all about why they should buy. You assert yourself as an expert in the industry, and position what you’re selling as the answer you know that they’re looking for. What’s the potential problem with this?

Well, as far as you have been concerned for the course of your sales career, nothing. This Old Model of Selling, as we’ll discuss at length, has been taught for so many years by so many sales gurus that we think it’s just what sales is supposed to be. No wonder, then, that the most common words associated with sales that come to people’s minds are “pushy, yuck, difficult, dishonest, sleazy, annoying, and manipulative.”

The New Model of Selling, or Neuro-Emotional Persuasion Questioning, is what we train companies’ salespeople, and there are a few vital key differences between these two modes of selling that will demonstrate why one is considerably more persuasive and effective than the other.

For a long time, many believed that prospects made purchasing decisions based on logic. And, logically, this does make sense. But, research within the behavioral science community has found that humans actually buy based on their emotions one hundred percent of the time — they just justify those emotional decisions with logic.

For example: if you felt emotionally compelled to hire a third party sales agent, perhaps the emotion behind that decision was lingering frustration that you don’t have enough hours during the day to get your creative work done because you have to do your own sales calls all day. This emotion – if strong enough – would compel the purchasing decision. But, you would then justify the decision with the logical reasons that outsourcing will be good for you, such as the amount of time you can get back, and the fact that you know several other successful entrepreneurs who have hired a similar service.

In the Old Model of Selling, the sales call is rooted in the sales rep talking about all the logical benefits of why the prospect should buy.  However, the New Model guides the prospect to persuade themselves why they should buy. Using Neuro Emotional Persuasion Questioning, the prospect starts to understand in their own mind what problems they have, why they have those problems (the root cause), and what the problem is doing to them, personally. They then begin to feel emotionally attached to solving those problems and compelled to do that now, with your solution.

Naturally, if a salesperson is doing almost all of the talking in a sales call, the conversation is really about the salesperson. Sure, the presentation is all about the product or service. But, talking at length about these logical features and benefits doesn’t make the prospect feel like the conversation is about their unique needs. It feels as though the salesperson is just reading the same script that they read on every single sales call. If the prospect doesn’t feel that you’re speaking directly to them and that you’re there to help them, they’ll find a way to get off the phone.

In the New Model, the focus on the prospect is established from the very beginning through proper questioning. This cannot just be accomplished by asking a cursory question like, “How was your holiday weekend?” Rather, this needs to be a focus set by seeing how you can help the prospect, and helping them to feel as though you truly are there to help them with their unique problems and situation, and not just to sell them something.

To do this, a dialogue between you and the prospect is needed. In our training courses, we teach that there are three main forms of communication. The most effective by far is dialogue, in which you’ll have a conversation with the prospect guided by the questions that you’ll ask. This is a stark contrast from the ‘presentation’ mode of selling that most salespeople have been taught. With NEPQ, questions are asked at the right time to create a back-and-forth conversation that keeps the focus on the prospect, while also orienting the salesperson (you) in a place of authority. As the dialogue continues and you ask the right questions to understand their situation, identify their problems, and go over how your solution will solve the problems they said they have, trust will be built.

This key difference is also rooted in the Behavioral Science-based truth that humans do not like doing something just because they were told to do it. In fact, they seldom will. For someone to persuade themselves, they have to hear the words come out of their own mouth, which can only be done if you ask the right questions to help them arrive at their own conclusion that you can solve their problems. They won’t buy something just because you’ve listened to their problem and told them what you think the solution should be – even if you do think you’ve built trust with them.

Think about it this way: if your brother, who you trusted more than anyone in the world, called you and told you to sell your current car and buy an Acura, would you do it? It doesn’t matter how much you trust someone — none of us like being told to do anything.

That’s why the New Model of Selling is a careful blend of everything that is necessary to make for a productive conversation (and a closed sale): focus on the prospect, a dialogue, building trust, and asking the right questions to get the prospect to persuade themselves. To learn more about how we help companies dramatically increase sales and ROI, you can go to www.7thlevelHQ.com. 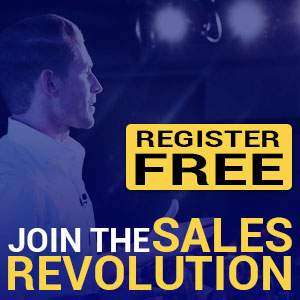